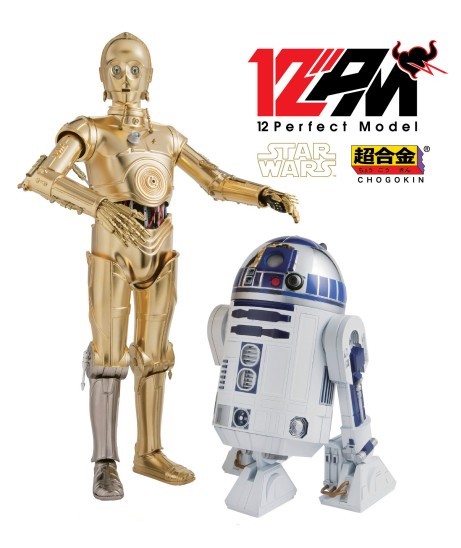 You like Bandai’s Soul of Chogokin line because of their diecast metal parts and superb finishing? Now Bandai’s Tamashii will be collaborating with Sideshow Collectibles’ Star Wars license and come out with their very first 1/6th Scale (12-inches Perfect Model 12PM) metal superalloy Star Wars figure! The first in line is the most popular character C-3PO based on the Star Wars Episode IV A New Hope!

About Chogokin
This product is a Chogokin, one of Bandai’s most respected international brands. The series is known for its abundant use of diecast metal, which gives its products a weight and a sense of presence unparalleled by other series.

About 12″ PM
The newest brand from TAMASHII NATIONS, devoted to spreading japanese action ﬁgure culture around the world. Created in the world-standard 12 inch (30cm) size, these ﬁgures feature unparalled play value. The lineup is designed to appeal not only to the japanese, but to worldwide audiences as well.
It takes an uncompromising approach to the format, drawing out every bit of the characters’ appeal. High-end models created by TAMASHII NATIONS for a worldwide audience.

This articulated diecast ﬁgure meticulously replicates C-3PO as the character appeared in the “ 1977 STARWARS: EPISODE IV A NEW HOPE” via extensive research with goal of creating a perfectly scaled model of the prop used in the ﬁlm. This ﬁgure is a precise 1:6 scale replication of the suit worn by 175cm tall actor Anthony Daniels and reﬂects slightly larger size than ﬁgure portrayals that depict C-3PO as the officially announced 167cm!

The ﬁgure itself, which weighs in at over 900grams (about 2 pounds), includes a sense of presence and realism that was achieved under the thorough prop analysis and supervision of Japan’s foremost Star Wars scholar, Seiji Takahashi!

Prototype photos attached and R2-D2 is posed together for reference. Sold separately.

[colored_box color=”yellow”]Preorder now at Toy Garden and Toywiz for RM1380, estimated released date February/March 2013. A deposit of RM150 is required to place order.[/colored_box]