Toywiz and Toy Garden Kuala Lumpur will be bringing in some limited edition lightsabers/stuntsabers from EFX Collectibles. These sabers are extemely limited and precision-cast with high quality and details. Drop by our shops to check them out.

OBI-WAN KENOBI LIGHTSABER ROTS – PRECISION CAST REPLICA
This is probably one of the most iconic versions of the Obi-Wan lightsaber. This piece was used in both the Revenge of the Sith and A New Hope by this beloved Jedi. This lightsaber is copied from the “stunt versions” used in the saga. Full resin construction with an electro-plated metalized finish. Includes covertec hook. 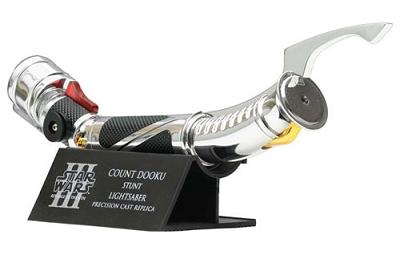 COUNT DOOKU LIGHTSABER – PRECISION CAST REPLICA
Unknown to the Jedi, Count Dooku had been corrupted by the power of the dark side by Darth Sidious, the Dark Lord of the Sith. Dooku left the Jedi order and took on the name of Darth Tyrannus and began recruiting agents that eventually led to the downfall of the Old Republic. He contacted the notorious bounty hunter, Jango Fett, to become the template for a hidden clone army on Kamino.

In the Star Wars movies, not only do they make multiple copies of the props we see on screen, but different versions, as well. These are divided into two categories commonly referred to in the industry as “hero” and “stunt.” Hero props are made for close ups and promotional pictures which require a “beauty” shot of the prop. Often they are featured with the main characters while stunt versions are used for the extras in the background.

Most of the time when a lightsaber is ignited on screen, it is a stunt version of the hilt. These props are usually cast in resin from the hero prop and then painted to look just like the hero prop. They are lighter and easier to wield while filming the exciting lightsaber duels and action scenes. In the case of the stunt lightsabers, there is usually a rod attached to the hilt so that the actors can actually duel and make contact with the blades. These rods are also invaluable reference points for the special effects technicians to later digitally add in the signature glows of the lightsaber blades.

This stunt lightsaber is a faithful replica of the hero prop used in the Star Wars movies and comes with a unique lightsaber and plaque stand to display your lightsaber. We are sure you will be proud to display this stunt version of your favorite character’s iconic lightsaber.