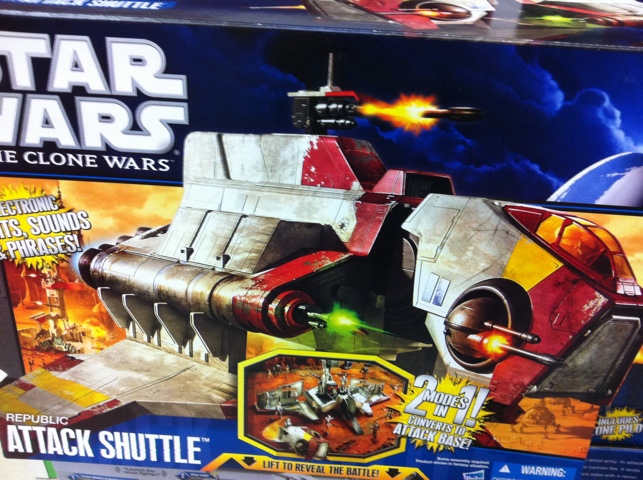 The latest Clone Wars vehicles from Hasbro, the 2011 Clone Wars Republic Attack Shuttle has arrived to Toy Garden and Toywiz now! In space or on the ground, the REPUBLIC ATTACK SHIP demolishes the droid army. In attack ship mode, this heavily armed vehicle pummels the enemy with laser cannon fire. It lands in the center of the battle and converts to an armored attack base with a recon fighter. Clone trooper forces operate the attack ship and armored base, using this powerful weapon to bring the battle right to the droid army!

Prepare for twice the out-of-this-world battle action! This detailed REPUBLIC ATTACK SHUTTLE vehicle features rotating wings to start it “soaring.” Put your CLONE PILOT figure in the cockpit and then detach it to create a recon fighter vehicle! If an attack begins and you’ve got to arm yourself for battle, convert your vehicle to armored attack base mode. Electronic lights flash as the base makes announcements like “Droid fighters — incoming!” and “All cannons fire” to prepare you and your CLONE PILOT figure. Get your enemies in your sights and then engage your pop-up missile-firing cannons! None of your opponents have a chance against you and this dual-mode dynamo! 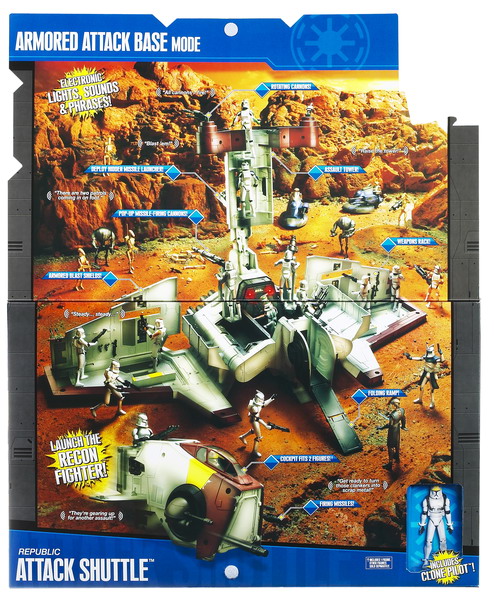