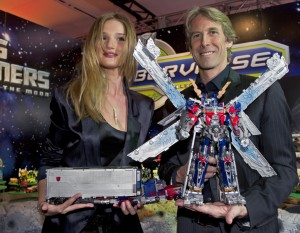 Rosie Huntington-Whiteley, who plays Carly in “Transformers: Dark of the Moon,” and Michael Bay (R), the director who brought Transformers to the big screen, look at the new “Transformers Ultimate Optimus Prime” toy which converts from a semi-truck to a robot, while visiting Hasbro’s American International Toy Fair showroom in New York, February 14, 2011. The new movie debuts on July 1. Ray Stubblebine/Hasbro