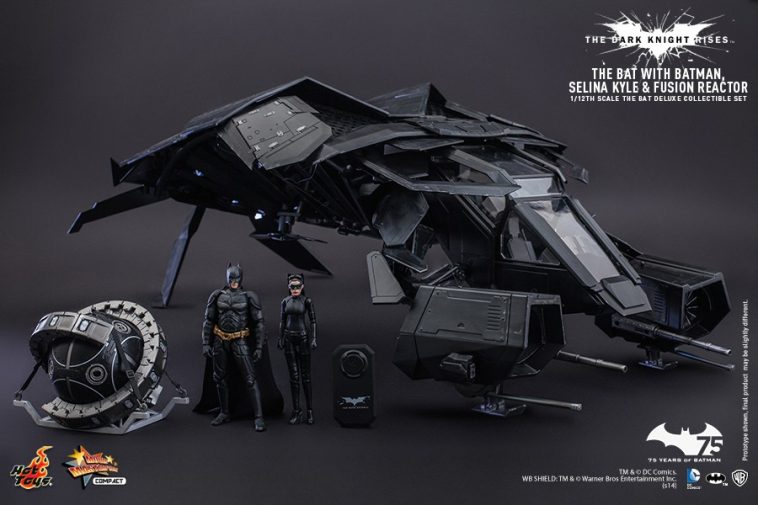 In The Dark Knight Rises, the epic conclusion to the Batman Trilogy by Christopher Nolan, Batman was presented an all new aircraft by Lucius Fox. During last year’s exhibitions, Hot Toys has showcased the prototype of the 1/12th scale The Bat and fans were already eager for the official reveal of this amazing collectible!

To celebrate Batman’s 75th anniversary, Hot Toys is excited to officially introduce the 1/12th scale The Bat Deluxe Collectible Set to our new MMS Compact Series and it is highly detailed and specially crafted based on the film. In addition to featuring finely sculpted aircraft structure, remote controlled LED light up and propellers spinning functions, and 1/12th scale Batman Collectible Figure, this Deluxe Set will also include a 1/12th scale Selina Kyle Collectible Figure and the fusion reactor Talia al Ghul planned to use to destroy Gotham. Batman fanatics don’t miss out on pre-ordering this remarkable collectible set and add it to your collection!

– Six (6) LED lights in the middle of aircraft

– Articulated flaps at the back

– One (1) set of collectible stands for The Bat

Preorder now at Toy Garden and Toywiz Malaysia for RM2150 and a deposit of RM300 is required to place order. Estimated release date Q3 2015.