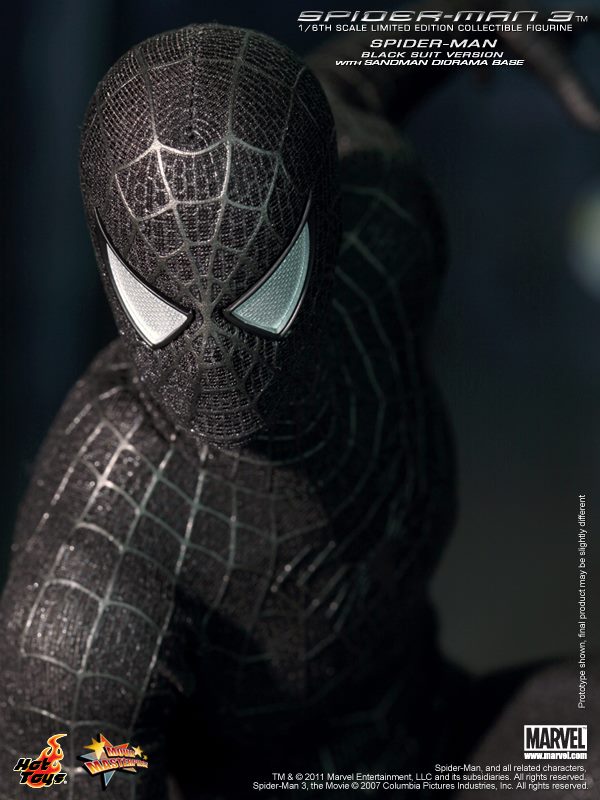 Now you can have your Tobey Maguire head sculpt for Spider-Man 3 and a black suit will be well suited for him! Hot Toys is proud to present MMS165 The 1/6th scale Spider-Man (Black Suit Version) Limited Edition Collectible Figurine with Sandman Diorama Base. Toy Garden and Toywiz Malaysia will be taking preorder for this item now!

– Authentic and detailed fully realized likeness of Spider-Man in black suit, featuring the likeness of Tobey Maguire as Spiderman / Peter Parker in the Spider-Man 3 movie

– TrueType body with 30 points of articulation

– Five (5) pairs of interchangeable palms with silvery web pattern including:

n One (1) pair of relaxed palms

n One (1) pair of palms for web shooting

n One (1) pair of palms for web swinging

n One (1) pair of palms for climbing

– One (1) black Spider-Man suit with improved silvery web and honeycomb pattern on head and body, with spider icon in the front and at the back of the body, with one (1) pair of black silvery web patterned boots

– Two (2) for imitating the flying scene

– Diorama base featuring the Sandman in the movie

– Figurine stand with Spider-Man nameplate and the movie logo

Start preorder now at Toywiz Malaysia and Toy Garden Kuala Lumpur for RM639 and don’t miss the chance to own this awesome figure!