Hot Wheels fans are searching high and low for the Elite collection, now Toywiz and Toy Garden will bring you these collectibles soon! Preorder now at Toywiz or Toy Garden!

Hot Wheels EliteTM is the Mattel brand devoted to replica car collectors and motor enthusiasts. This line-up faithfully reproduces in 1:18 and 1:43 scale the most famous and appreciated cars, each year adding new models. Distinct from the Hot Wheels® lines of vehicles, play sets and track sets, Hot Wheels EliteTM marks a new frontier for Mattel and confirms itself as one of the most appreciated producers among collectors. Thanks to its excellence and close relationships with major licensors such as Ferrari, Lamborghini, Maserati and Warner Brothers, Hot Wheels EliteTM represents a fresh start in model cars, taking an extreme generational step forward. Through this new line, Mattel communicates passion and enthusiasm for cars and affirms the brand as a symbol of quality, innovation, technology and exclusivity. 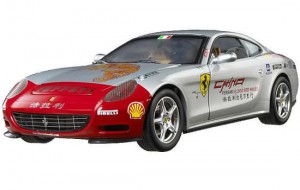 Hot Wheels Elite L7129 Ferrari 612 Scagliettis GT
The 612 Scaglietti is the result of an avant-garde design that continues the great Ferrari 2+2 tradition in fabulous style. Penned by Pininfarina, the 612 Scaglietti is named in honor of Sergio Scaglietti, the legendary Modenese stylist and coach-builder responsible for bodying some of the most beautiful Ferraris of the 1950s and 60s.
The two models offered by Hot Wheels EliteTM in 1.18th scale carefully reproduce the two Ferrari 612 Scagliettis, driven by teams of Chinese and international journalists, crossing the length and breadth of China during the ‘Ferrari 15,000 Red Miles,’ the first ever tour of China by a car manufacturer.
The 612 Scaglietti is not just another 2+2 but a spectacular, roomy two-door four-seater that’s a pleasure to be aboard regardless of driving conditions. The 1:18th scale reproduction is equally pleasingm with realistic detailing and die-cast metal. 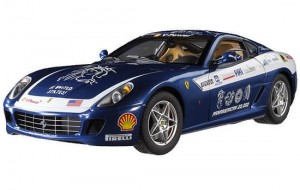 Hot Wheels Elite L7125 Ferrari 599 GTB Blue
The Ferrari 599 GTB debuted at the Geneva Motor Show in February 2006. It takes its name from the Fiorano circuit Ferrari uses to hone the performance of its track and road cars. ‘GTB’ stands for ‘Gran Turismo Berlinetta’ and ‘599’ is the displacement of the V12 engine divided by 10.
The car was designed with several objectives in mind: to increase driving pleasure; to guarantee performance; and to ensure comfort, ergonomics and safety. It is a concentration of Ferrari’s most innovative and technologically advanced engineering solutions applied to a front engined two-seat berlinetta. The all-aluminum construction technology for the body and the chassis made it extra light. That, with the powerful engine which produces 620hp at 7,600 rpm, the car obtains a weight/power ratio of just 2.6 kg per horsepower.
A mixture of soft curves, sharp creases and a few challenging details that take a little time to fully appreciate, the body of the car integrated advanced aerodynamic solutions and performance figures with a beautiful Pininfarina design.
These two Hot Wheels EliteTM models reproduce the two 599 GTB used during the latest and most persuasive test of Ferrari. On an often grueling, 15-leg journey, a team of forty-eight journalists took turns driving from Belo Horizonte in Brazil to the Argentinean pampa; over Andean plateaus and through mountain passes some 13,000 feet above sea level; through the Central American tropics and across Mexico and the United States , with a final stop in Canada before reaching the final destination in New York. 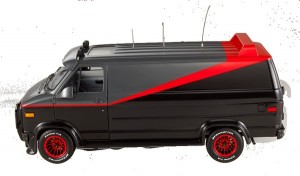 Hot Wheels Elite V7439 A-TEAM VAN
The “A-Team” van – the authentic one used in the 1983-87 television show – was a 1983 GMC Vandura cargo-van. The van is a 1983 G-series customized by Universal Studios Prop Department. The A-Team is an American action adventure television series about a fictional group of ex-United States Army Special Forces personnel who work as soldiers of fortune while on the run from the Army after being branded as war criminals for a “crime they didn’t commit”. Despite being thought of as mercenaries by the other characters in the show, the A-Team always acts on the side of good and helps the oppressed. The show ran for five seasons from 1983 to 1986 for a total of 98 episodes. Ready to relive past emotions?!

Hot Wheels Elite W1176 ECTO-1 GHOSTBUSTERS
The Ecto-1 is the legendary vehicle that the Ghostbusters used to travel throughout the city busting ghosts. The vehicle used for the Ecto-1 was a 1959 Cadillac professional ambulance, built by the Miller-Meteor company and converted by Universal Studios. “GhostBusters” is the famous 1984 American comedy film about three eccentric New York City parapsychologists-turned-ghost exterminators. Ready to live an incredible experience thanks to this car collection?!