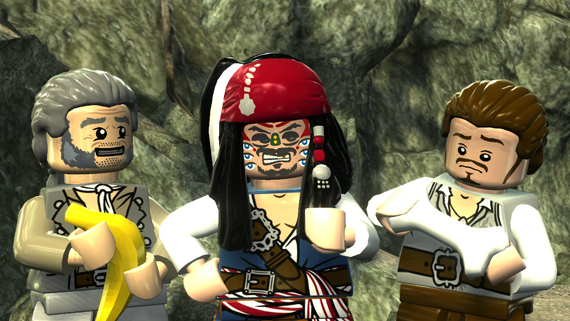 New Lego sets from the blockbuster movie Pirates of the Caribbean 4 On Stranger Tides have arrived to Toy Garden and Toywiz Malaysia now! Jack Sparrow and Barbossa embark on a quest to find the elusive fountain of youth, only to discover that Blackbeard and his daughter are after it too. The first wave of playsets from Lego are hot selling now! 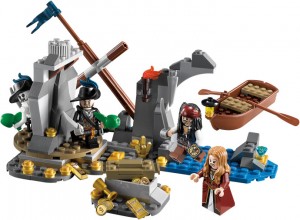 Protect Elizabeth and gain control of the Black Pearl! 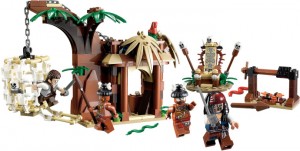 It’s nearly dinner time in the cannibal village when our pirate heroes Captain Jack Sparrow and Will Turner realize that they’re the main course! Break free of the bone cage and escape from the roasting spit before the cannibals get cooking! Hustle back to the Black Pearl and set sail before their hungry foes can hunt them down! Includes 4 minifigures: Jack Sparrow, Will Turner and 2 cannibals Features chief’s throne, bone cage, cannibal hut, 2 snakes, bird, bones and skulls Turn the spoke to raise and lower the bone cage! Adjust the chief’s throne! 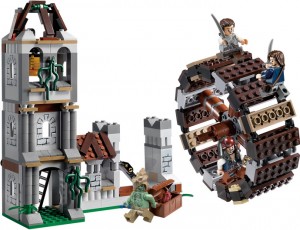 Capture the key to the Dead Man’s Chest!

The battle is raging for the key to the Dead Man’s Chest! Captain Jack Sparrow, Will Turner and Admiral Norrington are dueling to the death when the mill wheel suddenly shakes loose and sends the sword fight spinning out of control! Stay on your feet and clench control of that key before Hadras flees back to the Flying Dutchman with it! Includes 4 minifigures: Jack Sparrow, Will Turner, Admiral Norrington and Hadras Features detachable mill wheel, tower with bell rope, palm tree leaves, Dead Man’s Chest, seaweed, keys, fish, snake, weapons and translucent elements Pull the bell tower rope! Detach the mill wheel and get the battle rolling! 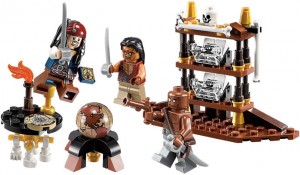 Grab the ship-in-a-bottle before you’re turned into fish bait!

In the dead of night, Captain Jack Sparrow sneaks into the cabin of a fearsome pirate captain to steal the treasured ship-in-a-bottle. Can Jack Sparrow get his hands on this piece-of-eight?Or will the henchmen, hiding in the shadows, teach him a lesson? You decide! Includes 3 minifigures: Jack Sparrow and 2 henchmen Features 2 ships-in-a-bottle, stand and globe Stand. 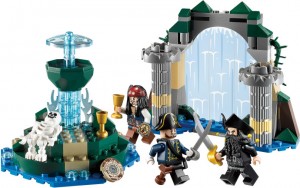 Fight your way to the Fountain of Youth! 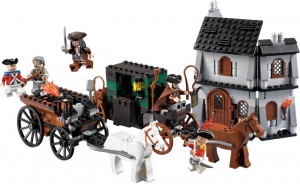 Captain Jack can run, but he can’t hide – for long! 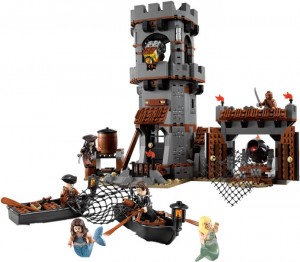 Captain Jack Sparrow and his band of pirates are lying in wait, plotting to capture one of the mysterious mermaids of Whitecap Bay. Hide inside the lighthouse, then use the searchlight to spot them in the murky depths below. Shoot the net from the boathouse cannon when they get close to shore! Beware of the whale oil barrels tipping near the open flames! Includes 6 minifigures: Jack Sparrow, Philip, Scrum, Syrena, pirate and mermaid Features lighthouse, boathouse, rowboats, net-shooting cannon and working searchlight Includes flame elements, gold bricks and coins Use the cannon to launch the net! Tip the whale oil barrel! Use the explode function to create chaos in the lighthouse! Searchlight really lights up! Row the rowboats with the oars! 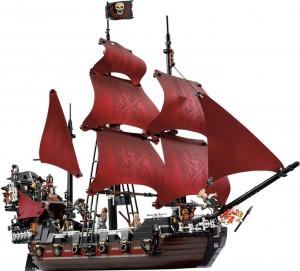 Set sail for the Fountain of Youth on the most dreaded ship on the high seas!

Captain Jack Sparrow and his motley band of pirates are taking control of the Queen Anne’s Revenge! It’s mayhem and mutiny as they seize the ship from Angelica and her zombie crew. If they only knew that Blackbeard, the pirate all pirates fear, is watching and waiting in the captain’s quarters. This time Jack has gone too far! Includes 7 minifigures: Blackbeard, Jack Sparrow, Angelica, Quartermaster, Cook and 2 pirates Features large sails, lanterns, fire elements and bone detailing Detach the captain’s quarters! Move the cannons! Steer with the helm!