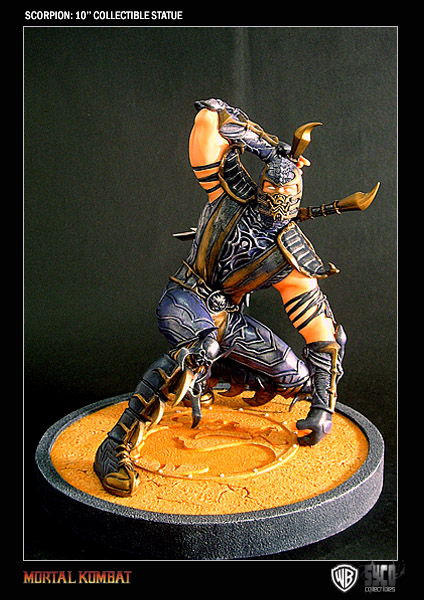 Toy Garden and Toywiz will be bringing in yet another exciting Premium Format line based on the Mortal Kombat 9 video game from Syco Collectibles. The first one being the Scorpion Statue!

The Premium Format Scorpion statue will be made from polystone resin and stands 8.5″ from the base of his foot to the top of his elbow. The Base is half an inch tall. Each statue has a head with LED’s lights in the eyes. Cast in high-quality polystone and hand painted, this outstanding figure is taken directly from artwork within the game.

Scorpion Background
Hanzo Hasashi was once a member of the Japanese Shirai Ryu ninja clan. Given the name Scorpion for his blindingly fast and deadly fighting skill, his life was blessed with glorious kombat in the name of his Grand Master. But when he, his family and his clan were brutally exterminated by Sub-Zero and the Lin Kuei, Scorpion’s existence became eternal torment. Resurrected by the malevolent necromancer Quan Chi, he entered the Mortal Kombat tournament to slay Sub-Zero and avenge the murders of his kin.

In stock now at Toy Garden and Toywiz Malaysia for RM529.