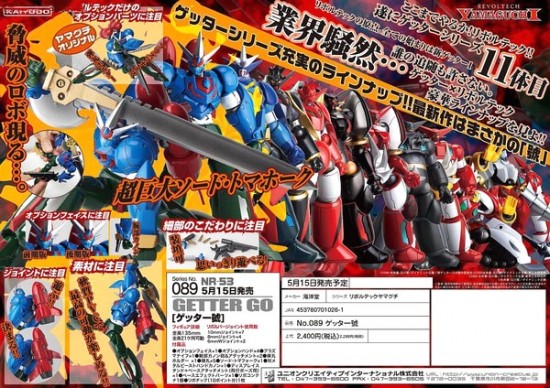 Toywiz Malaysia will be taking preorder for this Revoltech Yamaguchi series #089 Getter Go. Here is the arrival of the latest Getter Go Robot, concentrated heavily on the original series.
– With equipments and two types of head parts, compatible with the early version and the
late version too.
– Use the optional face and the arm cannon + attachment equipments to transform into the
later version!
– The arm cannon is detachable!
– Using 13 Revolver Joints on this dynamic body, and soft PVC used for the back and
abdominal plates. You will be able to enjoy the series’ greatest posing range!
– You can create a flashy pose with the enormous tomahawk sword.
– Comes with special Yamaguchi original parts (Plasma Knife, Bullet Holder)!!
It’s up to you to decide how you play with them!
– The original parts, Plasma Knife can be folded, and attached to the arm.
– The hand cannon can be loaded with bullets, and comes with a bullet holder. Compatible
with a variety of action poses.
– The knee armor and leg plate are adjustable, so they won’t get in the way when creating
large action poses.
– A W-Joint has been used for the rocket on the back.
– Able to change position with the flight pose, increasing the posing range.
– With the display stand and extension base, plus base attachment, allowing you to display
at the flight position.

– The original [Getter Robot Go] is the sequel to the [Getter Robot], which was published in
the monthly [Shonen Captain] in the 1991. It is a long series of 30 volumes.
– Some say this triggered the popularity of Getter Robo in the Heisei era.
– Unlike the previous Getter Robots, it had become a war manga involving the national army,
a very bizarre turnout. And the machine design, which was possible to be
reproduced as a toy, was drawing attention too.

Pre-order now at Toywiz Malaysia for RM109 and this item will be released around middle of May 2010. 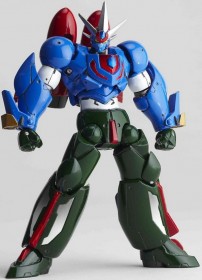 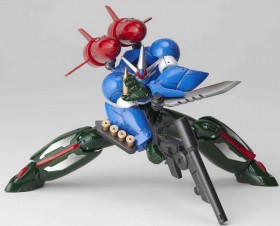