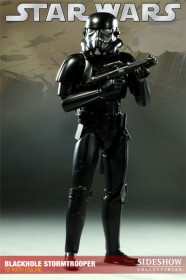 Sideshow is bringing us the Star Wars Blackhole Stormtrooper soon! Toywiz Malaysia and Toy Garden will be taking preorders for this exclusive figure now and expected to be very hot!

For much of the Galactic Civil War, a mysterious agent of Palpatine code-named Blackhole carefully sifted through countless streams of data, distilling it into useful information for Imperial Intelligence. Blackhole had an impressive amount of resources available to him, including an entire Star Destroyer and its complement of troops and fighters. Per his orders, the stormtroopers under his command had their armor cast in black to match his own particular eccentricities. The armor modification had practical benefits as well. The stygian-triprismatic polymer afforded the stormtroopers increased sensor-stealth.

Blackhole disappeared completely during the Galactic Civil War, and his forces were absorbed by other Imperial groups. When the Empire fragmented after the Battle of Endor, some of the Blackhole stormtroopers found their way into Carnor Jax’s private army.