Sideshow continues to bring us more Star Wars 12-inches Action Figure and this time they include the Star Wars Expanded Universe Stormtrooper Commander! 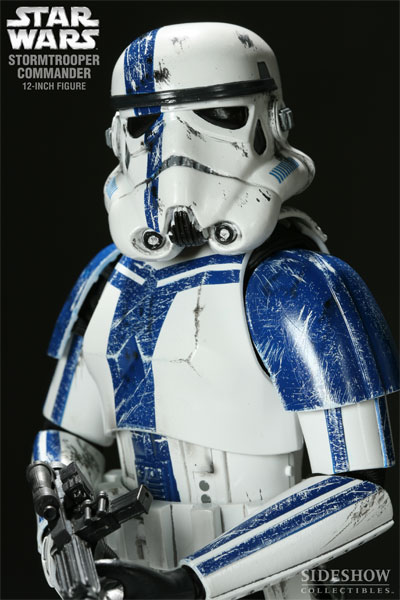 While this is coming only on 2009, we can expect more stormtrooper/clone trooper figures to add to our Star Wars 12″ collections! Check out the awesome figure from the pictures here. We shall update again when more photos are available.

We will be taking preorder for this item at RM360 and estimated arrivals of May/June 2009.

Backstory from Sideshow:
Soldiers unswervingly loyal to the Emperor, stormtroopers represent the most visible extension of Imperial might. They were shock troopers meant to strike with speed and accuracy, quelling insurrections and maintaining order on the far-flung worlds of the Empire. Stormtroopers serve both the ground-based armies of Emperor Palpatine’s forces, and the space-based Imperial starfleet.

Stormtrooper training stresses complete indoctrination in the tenets of the New Order, and officers are followed without question. Stormtroopers abandon individuality in exchange for loyalty, obedient to their orders without regard to the rights of others or even their own safety. They are completely encased in a white armored spacesuit shell, commanding officers denoted with colored shoulder pauldrons or other colorful visual splash. Their helmets contain comlinks for long-range communications, and they are armed with blaster pistols or blaster rifles. Specific environments call for specially trained and equipped stormtroopers, such as the snowtroopers that besieged the ice world of Hoth and the lightly-armored scout trooper that patrolled the forests of Endor.

The Stormtrooper Commander is always found on the front lines, leading his troops into any combat situation. This highly trained Imperial soldier is intelligent and resolute, as capable and fearsome as the ARC troopers of the Clone Wars era. They face perilous and dangerous missions without reservation, unswervingly dedicated to their orders and their obligation to the Empire. The Stormtrooper Commander is clearly visible on the battlefield due to his uniquely detailed armor, enhanced with added protection and gear, and he is equipped with a BlasTech E-11 blaster rifle.