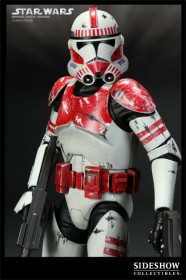 Sideshow brings us another Star Wars Trooper, the Imperial Red Shock Trooper. And this is definitely fan favorite which can’t be missed out by Star Wars Collectors and 1/6 scale collectors. Toywiz Malaysia will be bringing in this figure soon and expected to arrive around 4th Qtr 2009. We will start taking preorders for this item here in Toywiz Malaysia soon.

The red-marked soldiers of the Grand Army of the Republic were quartered on Coruscant and tasked with the protection of the Senate and other governmental facilities, as well as serving as guards and escorts for diplomatic envoys. Though such a role would suggest less exposure to frontline combat, extensive and well guarded training facilities on Coruscant served to keep the red-marked troops in fit fighting condition.

During the attack on Coruscant by the Separatists, the Shock Troopers emerged as one of the last lines of defense against the invading droid forces. These highly skilled troops, under the command of ARC-trained and promoted Commander Thire, were able to prevent many of the droids from demolishing some of Coruscant’s most ancient and revered edifices, but they were unable to prevent General Grievous from kidnapping the Chancellor.

Commander Thire was later tasked by Emperor Palpatine to scour the lower levels of the Galactic Senate to find any traces of Jedi Master Yoda. He subsequently served as one of Palpatine’s personal guards on Coruscant and during off-world trips. The Shock Troopers eventually became the basis of the Coruscant Guard, elite Stormtroopers tasked with providing security on the Imperial capital.