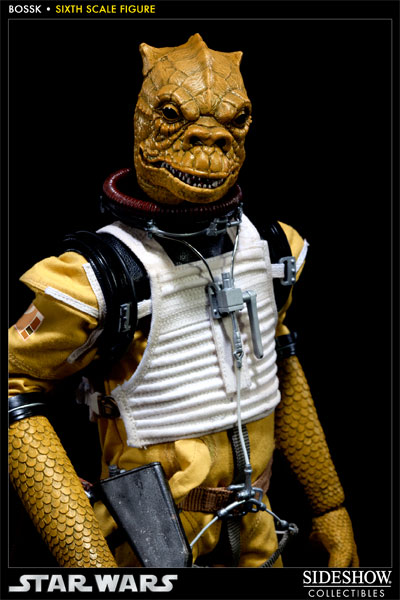 Sideshow Collectibles is proud to announce the newest addition to the Star Wars Scum and Villainy Sixth Scale figure line, the ruthless Trandoshan Bounty Hunter, Bossk. Toy Garden and Toywiz Malaysia will be having the stocks soon!

More about Bossk
The dreaded bounty hunter Bossk’s reputation as a killer began at birth, when he clawed his way out of his own egg and, moments later, devoured each and every one of his unhatched siblings. This display of savage dominance impressed Bossk’s father and earned him his name, which, in his native Trandoshan, translates to, ‘devours his prey.’

As he matured, Bossk developed a reputation for slaughtering and skinning Wookiees a Trandoshan tradition that threw him head-to-head with Chewbacca and Han Solo on several occasions. Their continued run-ins developed into a long-standing rivalry, and when he was approached by Darth Vader to hunt down and capture the Millenium Falcon, Bossk eagerly accepted the opportunity. That particular bounty was denied to Bossk, however, when Han Solo and his friends were tracked by Boba Fett to Bespin’s Cloud City after the Battle of Hoth.

Despite this significant loss, his tenure as a bounty hunter was mostly successful, spanning the time period from the Clone Wars and the Dark Times, all the way through the Rebellion and beyond. A true renegade, Bossk’s lengthy career found him toe-to-toe with Jabba the Hutt, the Galactic Empire, the Old Republic, and the Jedi Order. Bossk eventually even killed and devoured his own father for leadership of the Bounty Hunter’s Guild.