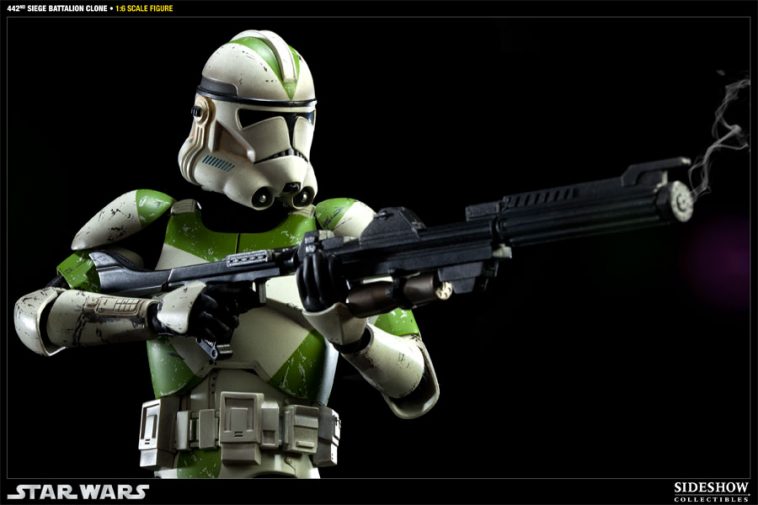 Toy Garden and Toywiz Malaysia will be taking preorder for the Sideshow Star Wars 12-inches 442nd Siege Battalion Clone Trooper soon. At the time of their introduction, the Republic clone trooper represented the future of galactic warfare. Far superior to the battle droid armies of the era, the clone troopers formed the backbone of the Republic’s new military initiative that battled against the forces of the Confederacy of Independent Systems.

Identical in form, physical prowess, stamina and mental capacity, each of the first generations of clone troopers were fully encased in hard white armor, each identical face concealed behind a t-shaped visor. Color-coded flashes on the armor denoted rank and eventually came to signify individual units, who often became more customized with mission specific gear and armor modifications. Units such as the Galactic Marines, the Shock Troopers, the Siege Battalion and the Star Corps had distinct armor variations that made them stand out.

True to their namesake, the 442nd Siege Battalion specialized in besieging enemy fortifications. Equipped with All Terrain Recon Transports and Infantry Support Platform speeders, the 442nd distinguished themselves during their participation and aid in the capture of Cato Neimoidia, a key Trade Federation stronghold.
The 442nd Siege Battalion Clone Trooper Sixth Scale Figure features:

Start preorder now at Toywiz Malaysia and Toy Garden Kuala Lumpur for RM349 and don’t miss the chance to own this awesome Star Wars figure!