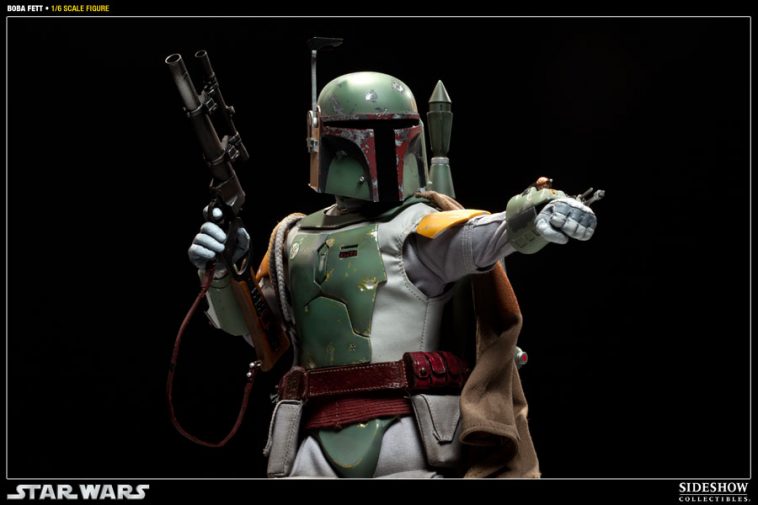 Finally we will have a Boba Fett from Sideshow’s Star Wars 12″ Figure series, and from the pictures shown, this is one of their best Star Wars figure you shouldn’t miss out! Toy Garden and Toywiz Malaysia will be taking preorder for this item now.

No name strikes more fear into the heart of a galactic fugitive than that of Boba Fett. The famed bounty hunter’s cool, helmeted visage is known to the denizens of countless worlds, though few have ever encountered the mysterious warrior, and fewer still would have any clue to his true identity or face.

The product of Kaminoan cloning, Boba Fett was the unaltered clone and son of Jango Fett, a Mandalorian hunter no less deadly in his day than his progeny. Trained in the techniques of his people and gifted with his father’s cunning, young Boba follows in Jango’s footsteps after the bounty hunter’s untimely death on Geonosis. Boba Fett’s trademarks are his instantly recognizable Mandalorian battle armor, his scorched jetpack and battered old Firespray interceptor Slave I, inherited from his father. All the bounty hunter’s tools are custom fitted with modifications and improvements that grant him the edge in tracking and tackling his marks.

Through a military-style dedication to his art, native predatory instincts and an innovative battery of hidden surprises, Boba Fett has carved a reputation as the man who gets the job done. By the time he is recruited by Lord Vader to hunt down the Millennium Falcon during the Galactic Civil War, Fett has already become a feared and respected warrior, standing as an equal among the elite of his profession and the preferred contractor of Outer Rim crime lord, Jabba the Hutt. His successful tailing and capture of Han Solo allows him to collect double on the deal with both the Sith Lord and the Hutt, and also closes the books on a job that has occupied him for far too long.

Start preorder now at Toy Garden Kuala Lumpur and Toywiz Malaysia and don’t miss the chance to own this masterpiece! RM579 for this awesome figure and a deposit of RM30 is required to secure your preorder