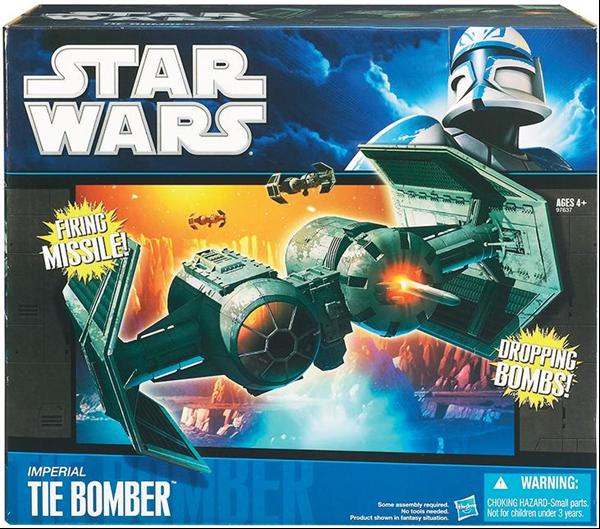 We have received the latest Star Wars vehicles from Hasbro as well. This Imperial TIE Bomber vehicle is features the firepower and the intricate details to make the action feel as realistic as possible. Put a figure (sold separately) into the highly detailed cockpit and prepare to blast off. Once youre in the air and youve spotted the enemy below, drop the bomb accessories from the bay. Are airborne opponents heading your way Fire the missile accessory to protect yourself. If they just keep coming, youve got no choice use your removable ejection seat to take your figure to safety! But dont forget as soon as one battle is over, the next one begins!Vehicle comes with missile and bombs accessories.

The TIE Bomber is a destructive workhorse, capable of carrying various payloads including concussion missiles and proton bombs. Like its relative, the TIE Fighter, the TIE Bomber has a pair of solar array wings. Between those wings are twin cylinders; one is the cockpit and the second is the weapons bay. What it lacks in speed, it makes up for in precision targeting that eliminates the intended objective with little or no collateral damage.

Toywiz Malaysia and Toy Garden is selling this item at RM159 each. Hot selling now!