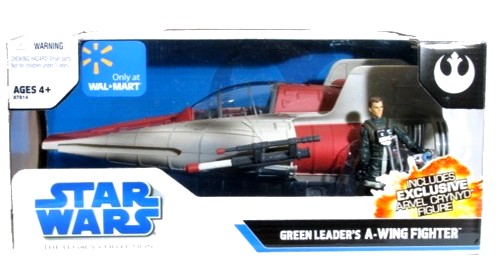 A-Wing Fighter description:
In a desperate sacrifice during the Battle of Endor, Arvel Crynyd aims his A-Wing Starfighter crashing into the bridge of the mighty Executor, causing the Super Star Destroyer to crash into the second Death Star and turning the battle in the favor of the Rebels. Though just a repacked vehicle this A-Wing has a slightly new deco and a new cockpit interior. Also it comes with a more accurate Arvel Crynyd action figure with removable helmet.

B-Wing Fighter description:
In the story Small Victories from the Star Wars: Rebellion comic series, Rebel Alliance B-Wing starfighters take on an Imperial fleet while trying to rescue Luke, Leia and the crew of Rebel One from an Imperial refueling station. Rebel officer Lieutenant Pollard leads the fledgling Dagger Squadron on their very first mission that’s full of daring and danger. B-Wings pack a powerful punch in battle; these heavy assault fighters/bombers are armed with cannons and torpedoes, and a rotating cockpit enables pilots to execute advanced attack maneuvers.

Gear up for galactic adventure with this awesome fighter vehicle! Open the canopy and slide the pilot figure inside the fully-rotating, gyro-stabilized cockpit. Pull back the retractable landing gear and you’re ready for take off!Fire missiles from interchangeable cannons as you narrowly escape the enemy. You can even customize your B-Wing Fighter as one of four different Dagger Squadron fighters with the included labels!