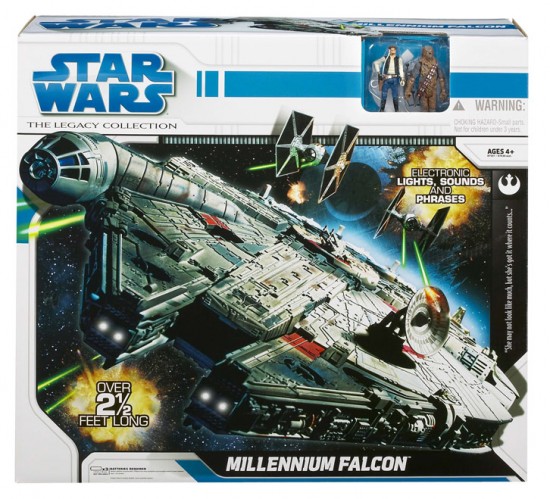 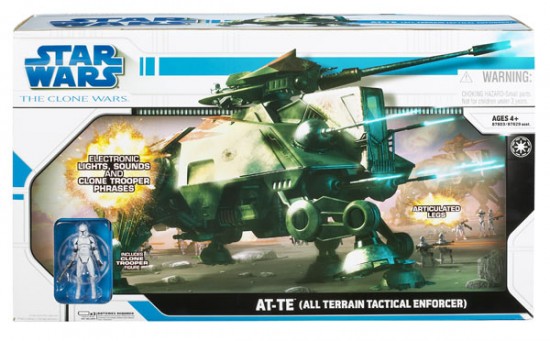 Millenium Falcon description:
Best known as the fastest ship in the Star Wars galaxy, piloted by Han Solo and Chewbacca, this detailed replica of the rebel spacecraft packs powerful secrets and special modifications – inside and out. Measuring more than two-and-a-half feet long, the Millennium Falcon’s uniquely circular style is ready to “blast off” with light-up headlights and loads of electronic vehicle and weapon sounds, including engine boost, cruise mode, fly-by, firing cannons and much more!

Millenium Falcon can open the light-up cockpit and fit up to four figures inside. The vehicles comes with Han Solo and Chewbacca figures and can hold up to 16 more figures inside its secret smuggling compartments, pivoting gunner station or missile-firing mini-fighter vehicle.

Remove the outer panels to access the ship’s interior. Then, head for the medical bay to “treat” wounded troops! Activate deployment sounds and landing lights with the auto-opening boarding ramp. Or plan your attack against the Empire with a pivoting gunner station, rotating laser turret and 3-missile launcher, with plenty of realistic blasting sounds and projectiles to keep enemies at bay.

A pivoting training probe makes lightsaber and movement sounds for those who wish to practice their Force fighting skills. Trigger more than 20 authentic movie phrases and sounds from the voices of Han Solo, Luke Skywalker, Obi-Wan Kenobi, C-3PO, Chewbacca and R2-D2! Light up the hyperdrive engine lights and fly your imagination into the next constellation – or the other end of your playroom! Add this impressive vehicle to your collection and recreate your favorite battle scenes, or strategize your own endless action adventures!

AT-TE (All Terrain Tactical Enforcer) description:
The All-Terrain Tactical Enforcer (AT-TE) blasted its way into battle for the first time at the Battle of Geonosis, and proceeded to unleash its aggressive power all through the Clone Wars. This armored assault vehicle moves with unyielding intimidation toward enemy fortifications, plowing through energy shields and firing its six laser cannons and a heavy projectile cannon all the way. Its interior can hold a squad of clone troopers that can be quickly deployed for ground combat.

March your Clone Trooper army (one figure included; others sold separately) into one of your staged battles aboard this impressive AT-TE vehicle. Pose the articulated legs as if it’s “marching” into battle and activate the electronic walking sounds! Take aim at enemy troops with the built-in blaster rifle and pistol racks and a total of six firing “laser” turrets! A firing main cannon features blasting sounds and lights when triggered. Adjust one of the multi-rotational front cannons and they all move together. Deploy your troopers into battle through the auto-deploy hatch and hear authentic Clone Wars trooper phrases, like “All units fire at will.” “Approaching droid perimeter. We are undetected.” and “The droid army is in full retreat.” Make your mark on the galaxy and roll out some Star Wars excitement with this action-packed vehicle!

ADDED NOV 14, 2008: These vehicles been restocked now at Toywiz Malaysia.