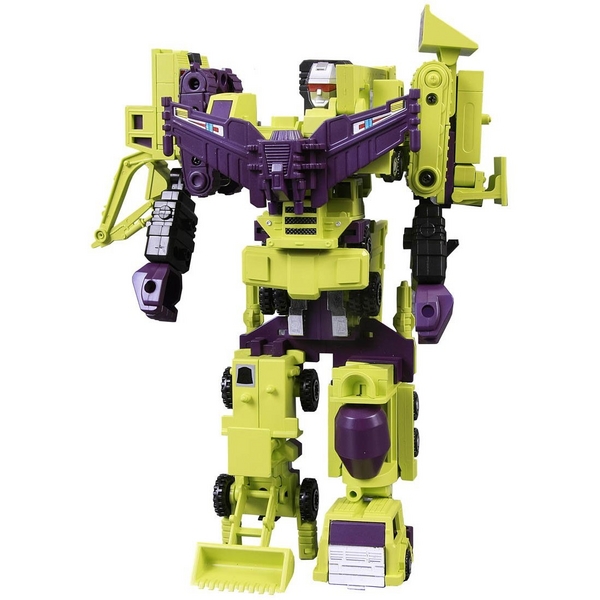 Takaratomy announced a repainted cartoon color of the Transformers Encore #20 the constructicons Devastator, and this time comes with a new head mold as well. Toy Garden and Toywiz Malaysia will be taking preorder for this Encore-20A G1 Devastator which is slated for a Jan 2013 release!

[colored_box color=”yellow”]Preorder now at Toy Garden and Toywiz Malaysia for RM330 and a deposit of RM30 is required to place deposit.[/colored_box]

More Description:
Scrapper: Despite his modest nature Scrapper is characterized as a formidable designer of fortresses and energy plants. His darker side is demonstrated in his penchant for incorporating the remains of defeated Autobots into his sprawling constructions. Scrapper’s shovel attachment can heft 30 tons, and is capable of shearing through 12 inch thick carbon-steel. The leader of the Constructicons, Scrapper forms Devastator’s right leg.

Long Haul: Long Haul often laments his prosaic role in the construction of the Decepticons’ energy-recovery installations while simultaneously acknowledging the significance of his duties. In vehicle mode Long Haul is capable of transporting 90 tons for 1200 miles. In robot mode Long Haul is outfitted with a dual heat-seeking missile mount. Long Haul comprises the lower body of Devastator.

Hook: Hook’s precision and intricacy in unsurpassed by Decepticons and Autobots alike, enabling him to perform duties as tentative as the reconnection of damaged microchips or as Herculean as the situation of two-ton girders. Characterized as arrogant and aloof, Hook’s off-putting demeanor and perfectionism make him unpopular even among his fellow Constructicons. Hook forms the upper body of Devastator.

Bonecrusher: In stark contrast to Hook, Bonecrusher exacts brutal destruction on all things in his path, creating the detritus-laden landscape where he feels at home. His unmitigated destructiveness breeds fear in his hapless adversaries. Bonecrusher is a juggernaut encased in titanium-steel; his vehicle mode enables him to generate a force of 800,000 pounds per square inch at a speed of 30 mph. Bonecrusher forms Devastator’s left arm.

Scavenger: Debilitating insecurity prompts Scavenger to earn acclaim among his fellow Constructicons by obsessively excavating valuable items wherever he finds them. He is only tolerated by his teammates because of the magnetic, ionic, electrical and gas sensors inherit in his shovel attachment, which enable Scavenger to detect crucial elements. Scavenger forms Devastator’s right arm.

Mixmaster: A deranged presence on the battlefield, Mixmaster scours inanimate and animate objects alike, siphoning them into his mixing drum to create new materials. Characterized as a mobile chemistry lab, Mixmaster fuels his mixing process with a variety of acids and bonding agents. Mixmaster forms Devastator’s left leg.

Devastator: A monstrous presence on any battlefield, Devastator is a manifestation of unreasoning brute strength which thoroughly engulfs and jumbles the individual minds and personalities of the six Constructicons. Devastator’s height and strength enable him to destroy a bridge with a single swipe. Only marginally aware of his surroundings, Devastator is deployed for the singular purpose of pulverizing anything in his path.