Previous Next
Quoted from TFW2005 – “Million Publishing has put up more information and a sample cover image for Transformers Generations 2009 Volume 2. The second volume will contain an article on the “Jetrons”, more commonly known to English audiences as the Seekers!

This book also comes with a coupon to entitle the pre-ordering of the Starscream Ghost Version exclusive repaint of Henkei Starscream. Toywiz Malaysia will be taking preorders for this exclusive item not available anywhere else.

The Transformers Generations 2009 Vol 2 is available now at Toywiz Malaysia and retail at RM120. Grab this book now as it’s limited quantities availble. 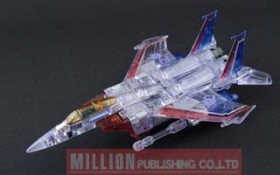 On the other hand, we will be taking preorder for the exclusive item Ghost Starscream. This figure will need to be purchased and ordered separately apart from the book itself.