Transformers Universe series now comes with additional comics inside with this new exclusive 2-pack: Autobot Ambush (with Autobot Roadbuster and Dirge) and Standoffs Beneath The Streets (Springer and Ratbat).
These Target exclusive Comics Packs are in stock now at Toywiz Malaysia, selling @ RM104 each. 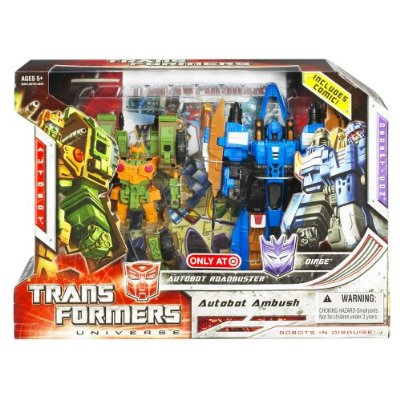 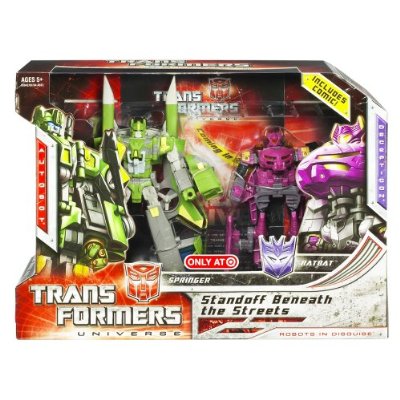 Flip open the plasma rocket launchers on the Springer robot figure to reveal firing projectiles and use the activation key to reveal spinning Energon blades. Convert the fierce fighter to vehicle mode to unleash a no-nonsense helicopter vehicle with a working winch. Battle with the Decepticon forces when you team up with the devious-looking Ratbat figure with his pop-up internal displacement cannon and combat blades. Convert the winged robot figure to vehicle mode for an awesome aircraft vehicle and head into a roaring battle of good vs. evil. Figures come with an activation key and a comic .

Flip open the secret panels on the Autobot Roadbuster robot figure to reveal missile racks and discover a hidden close-combat blade. Convert the fierce fighter to vehicle mode to unleash a no-nonsense tank vehicle. Don’t forget to use the included activation key to unlock cool features
Battle with the Decepticon forces when you team up with the devious-looking Dirge figure and his snap-out Energon blade. Pop open the recoilless rifles to reveal missile pods and head into an roaring battle of good vs. evil.